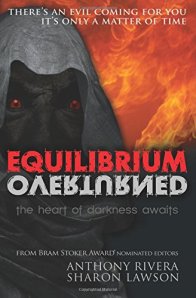 As a contributing author to Equilibrium Overturned, I was asked to participate in the Uncovering Evil Blog Tour, and am thrilled to do so. I’m not a philosopher or a theologian, so this won’t be a long drawn-out discussion of the nature of evil. Instead, I’ll just share a few of my thoughts.

I don’t personally believe in a devil or other personification of evil. Instead, I’m of the mind that evil is one side of the coin, with good on the other. I’m reminded of the line from the movie Legend – “What is light without dark? I am a part of you all.”

We all have a bit of darkness inside, the ability to do things that might be considered evil. I think it’s an evolutionary holdover, a survival trait. I’m not a killer, far from it; yet in defense of myself, or even more those whom I love, I could and would kill to protect them. There are a some who would call that evil.

In the simplest terms, I think anyone is capable of doing evil. There are myriad shades of grey involved, from telling a lie to betraying a trust, to causing physical harm to another. I think most people try to live the golden rule, to treat others as they would like to be treated. But I guess I’m one of the lucky ones, who have been surrounded by people with mostly goodness and light in their hearts.

However, that being said, I have no qualms about using evil as a plot device in a story. Evil in one form or another is usually the thing that gets a story going. In Through the Ghostlands I don’t really touch on the part evil plays in the story except in passing. Natural disasters and their aftermath cause the greatest changes that put my characters in the predicament they’re in. But the human reactions of fear and greed definitely fall under that umbrella. While I don’t consider the wandering spirits in the tale to be inherently evil, in some ways I guess they are. I see them more in line with the natural disasters of volcanic eruptions, earthquakes and tidal waves, where the harm that they cause is not intentional but simply part of what they are. Yet they are drawn to the living, to the life that has been lost and cannot be regained, and they cause harm with no regard for those they touch.

My original inspiration for Through the Ghostlands was actually a dream. I lived for a year in Florence, Oregon less than a mile from the beach. Often I would go to the South Jetty and climb the high sand dunes that run parallel to the beach, to spend time walking along the surf. I dreamed of being back there at the dunes, climbing up the steep eastern side with a monochromatic sky above, and when I reached the top found only a dead and empty sea. Waking up with that picture in my mind’s eye, I started writing. I wrote it in about a week, and can still see that dead world when I close my eyes. 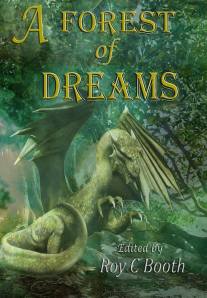 Twenty established and up and coming fantasy writers, all members of the Fantastic Fantasy Writers Facebook Page, stretch their creative muses with 19 highly creative tales ranging from non-traditional dragons to mud maidens to a two headed centaur. Here imagination knows no bounds!

The Trouble with Dragons by Allan B Anderson

When Darkness Falls, the Light by Rose Blackthorn

The Bell by Dave de Burgh

Accounting for Change by Jan Goeb

Only a Nightmare by R Scott McCoy

All the Leaves Your Bed by Michael Merriam

The Last Unicorn by Druscilla Morgan

King Kong Died for Your Sins by James Pratt

Jack’s Day Out by Maggie Secara